What do the colour seals of jamón ibérico mean?

The jamón ibérico is one of the jewels of our gastronomy that can be obtained from ibérico pigs. These pigs, which are native to the Iberian Peninsula, have certain genetic characteristics that provide the pieces with a succulence and an incomparable flavour. It is important to bear in mind that, in order to be able to say that a ham is ibérico, it must have a minimum of 50% purity of this breed.

In some cases, however, belonging to the Iberian breed is not enough. Depending on the category to which the ham will belong, the pig will need to go through its last phase of growth in a unique ecosystem called dehesa, full of trees that produce acorns, which will become the basis of the pig’s diet. This will bring unique flavours and aromas to the ham.

If, in addition, we have the experience of our experts and producers, who will treat the product with care and delicacy, we will obtain an Iberian ham of optimum quality.

It has been two years since the new regulation about jamón ibérico was approved. One of the aspects it included was that jamones ibéricos made as of 2014 had to have a label on its caña that will help us identify its typology.

Which are those colors and what type of jamón ibérico do they correspond to?

There are four colors of  Seals: black, red, green and white. We will see which color corresponds to each type of jamón, but before that I would like to explain you the three aspects that differentiate each jamón: 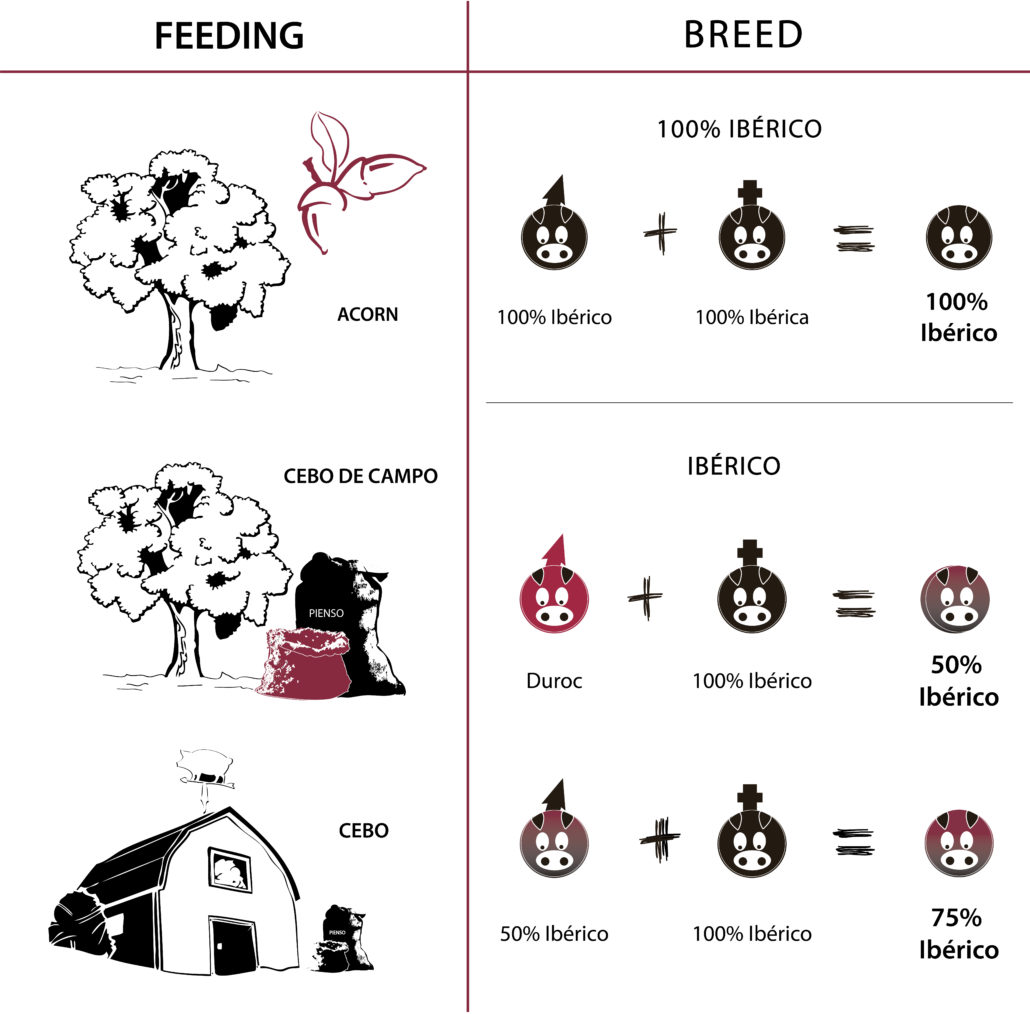 These three variables will be useful to understand the types of jamón ibérico, since according to their combination a pig will belong to one category or another:

These jamones come from pigs of 100% ibérico breed that have basically been fed on acorn, pastures and natural resources from the dehesa in the open air. This is the highest category of jamón.

The green one corresponds to those jamones that come from a pig mainly fed on cereal feeding stuff and legumes, and that sometimes receives additional natural pastures. Its rearing can be done both in extensive or intensive exploitation, provided that they are in the open.

With regard to the breed, it can be 100% ibérica, 75% ibérica or 50% ibérica. In order to verify the breed percentage, as in the previous case, we will have to look at the label.

This Seal identifies the jamones that come from pigs fed on natural pastures in farms (indoors).

As in the green and the red one, in order to know its breed, we will have to look at the label. This Seal includes jamones 100% ibéricos, 75% ibérico breed, 50% ibérico breed.

It is important that when you buy a jamón ibérico you look at the type and colour of the  Seal and its label, not all the jamones ibericos are equal and these colours will help you to make a decision.